The store will not work correctly in the case when cookies are disabled.
Koos Van Den Akker 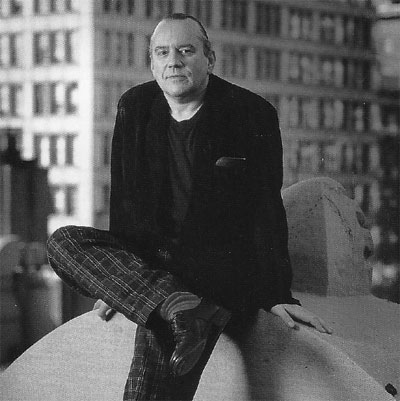 Fabric is always the focal point in Koos van den Akker's work. Often using a chaotic mix of luxury fabric, patches and panels, he combined all elements into a surprisingly unified whole. According to the designer, his garments always "start with the fabric. Silhouettes come later." Though Koos van den Akker apprenticed at Christian Dior from 1963-1965, his work demonstrates little interest in a precise fit, one of the traditional concerns of the haute couture. Nor is he interested in the interaction between garments and the human body, declaring that "shapes are not really what I'm interested in." Instead, he prefers to use his garments as an arena in which to explore the visual and tactile qualities of different textiles.

His painstaking and detail-oriented design process clearly reveals his training in the haute couture. When creating one-of-a-kind garments for a specific client or as a production prototype, van den Akker begins with a single pattern piece, which becomes the foundation for his fabric collages. Selecting from his extensive collection of fabrics, he chooses several fabrics of different textures, patterns and scale. Each piece is hand-cut and manipulated on the foundation until the desired effect is achieved, and then basted in place. After each element of the collage is basted to the foundation, applique, quilting, slashing, bias tape and other techniques or embellishments are used to create additional texture and visual appeal.

Because of their unique appearance, Koos van den Akker's designs are sometimes termed "artwear." Emerging in the early 1970s, the artwear or art to wear movement focused on the creation of unique garments using labour intensive and difficult techniques borrowed from traditional textile crafts. Though the appearance and process of his designs may invite comparisons to artwear, he resists the idea of himself as an artist. Koos Van den Akker also refuses to call himself a fashion designer. Rather, he seems to like the idea of having a foot in both worlds, declaring his work "not fashion, not art--just inspired, modern collage with a lot of details."