The store will not work correctly in the case when cookies are disabled.
John Galliano 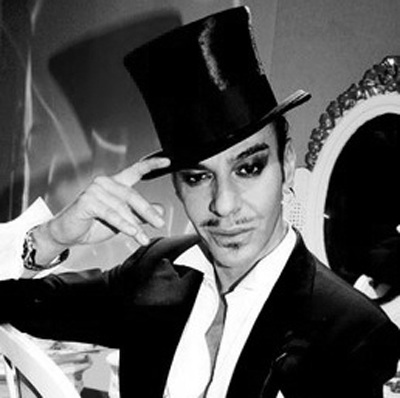 In 1966 John Galliano and his family moved to London. A massive culture shock awaited Galliano, as he was removed from his more vibrant former surroundings. His family prided itself immensely on appearance and each time he left the house as a child, Galliano was immaculately turned out. These standards of dressing, especially when he compared himself with his more slovenly English schoolmates, made him stand out and taught him important standards of dress, which he would require later in life. However, he was not considered an outstanding student. It was not until Galliano reached design school and was around people more like himself that he began to flourish.

Once Galliano had graduated from City and East London College, he enrolled at Central Saint Martins, where he made a remarkable impact. His graduation collection, titled ‘Les Incroyables’, made brilliant by his romantic flair and diligence, received huge approval. Indeed, his whole line was hastily snapped up and put into the window of Browns boutique. Galliano left Central Saint Martins in 1983 with a first class degree and a healthy stockpile of critical acclaim.

In 1984, Galliano launched his own label. More critical approval followed. His daring reinvention of romantic themes and delicate, superbly tailored garments were his trademarks.

In 1987 he received the ‘British Designer of the Year’ award. However, critical success was not matched by major financial success. He lost backers and did not have enough money to show for several seasons. In frustration, he quit London for Paris in the early 1990’s. This was not an immediate solution. Several times Galliano was almost forced to declare bankruptcy. This was made all the more bitter by the fact that, while he struggled for money, his critical praise continued unabated. Fortunately, the admiration of the fashion community allowed him to continue. Fashion editors and critics were always busy trying to get work for Galliano, and models, like Kate Moss, worked for him out of friendship rather than money.

In 1995 Galliano finally got the break he so richly deserved; he became the first English man to head a French couture house, when he was put in charge of Givenchy. His knack for taking themes and styles, often Latin or romantic, from the past, and somehow making them contemporary and edgy, is astonishing. Perhaps just as remarkable is the perseverance and conviction of the man. He has managed to keep his talent undiluted through difficult times and emerge with glory and success. View our Pinterest Board - John Galliano