The store will not work correctly in the case when cookies are disabled.
Jakob Bengel Modernist Cone Bakelite Necklace 1930s SOLD 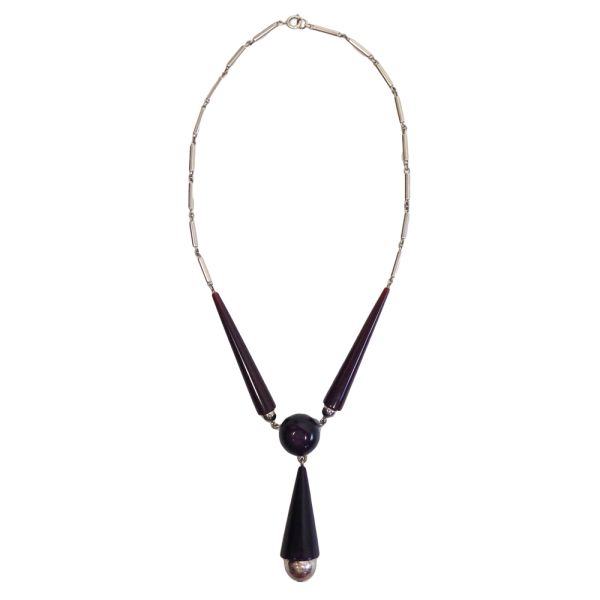 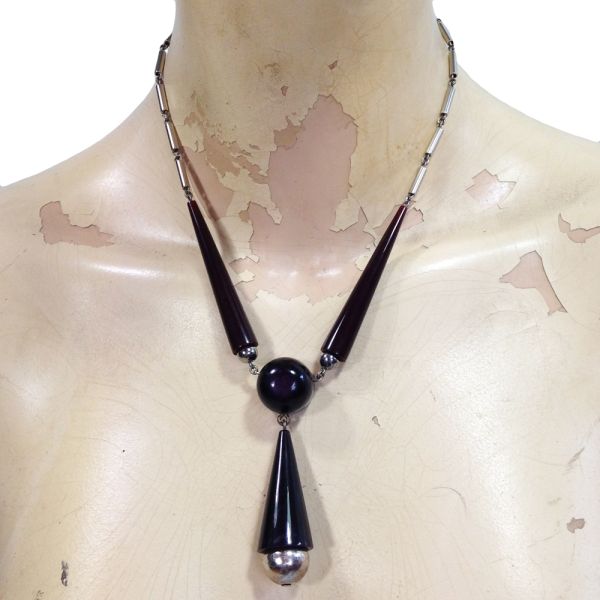 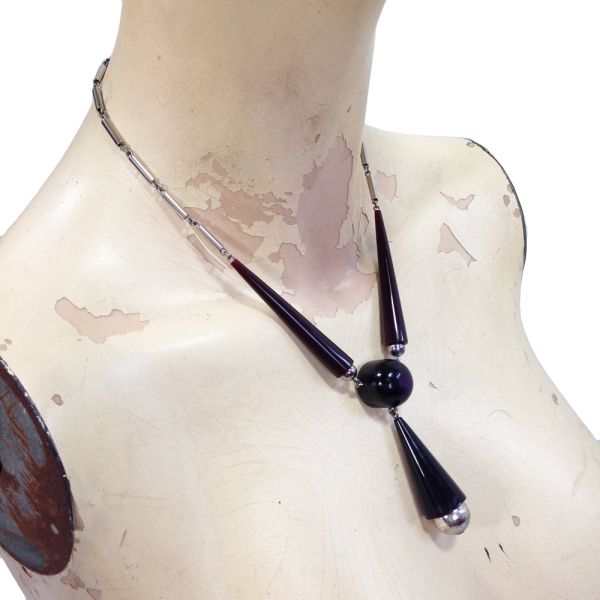 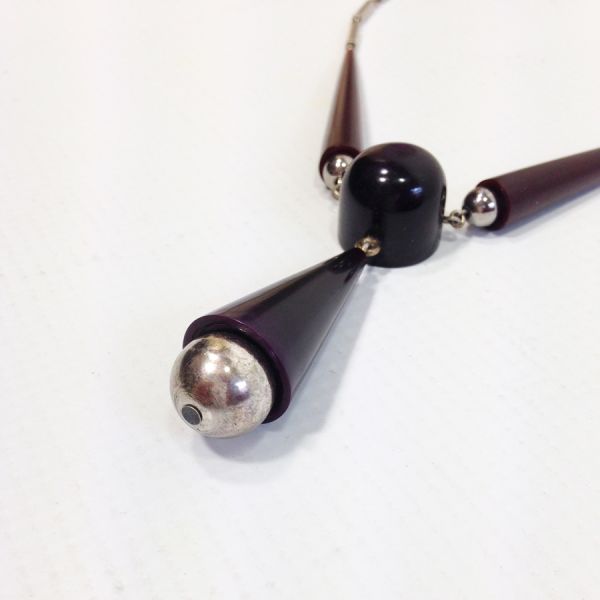 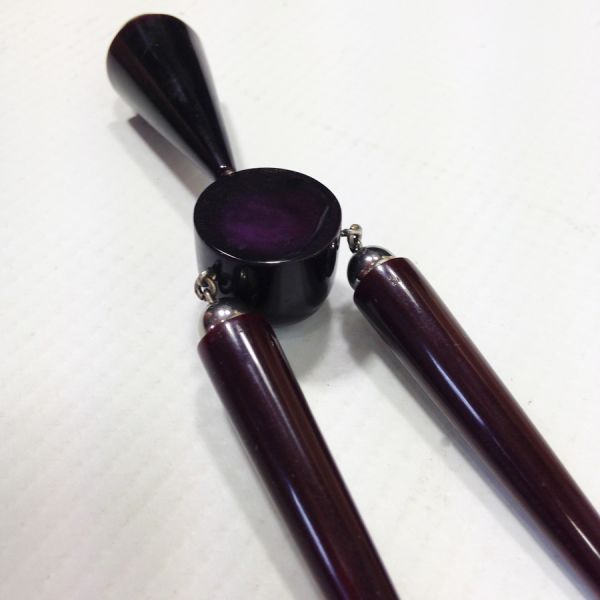 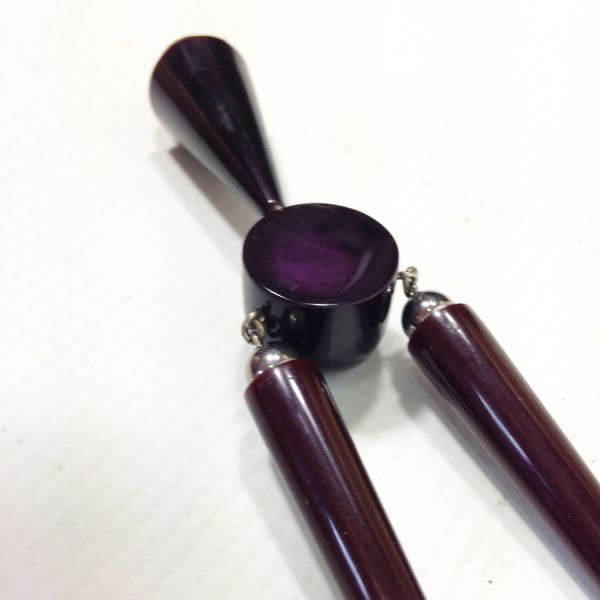 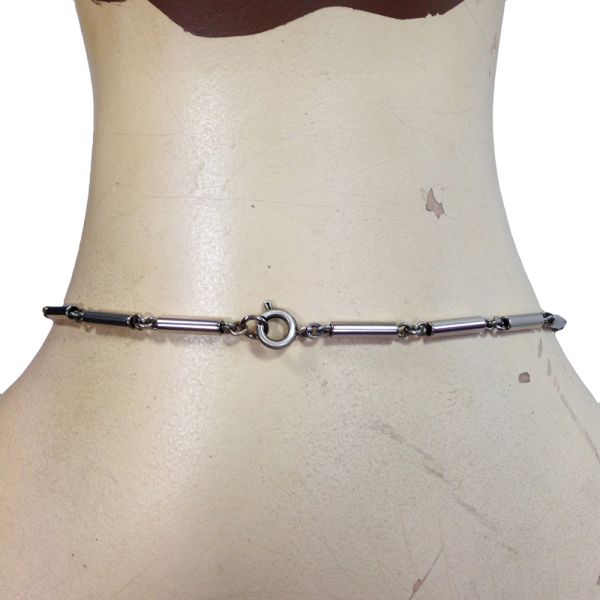 Condition: Used. Excelllent with only the slightest signs of use, commensurate with age

* Galalith is a synthetic plastic material manufactured from casein and formaldehyde

Founded in 1873 by locksmith Jakob Bengel, the company first produced pocket watch chains in brass and silver. During the early 1930s the company began to experiment with more versatile new materials and designs, to produce an entirely new form of costume jewellery. Rejecting material snobbism, Jakob Bengel’s geometric designs in chrome and bakelite (galalith) were clearly inspired by the severe lines of the Bauhaus and Art Deco aesthetic. In fact, Coco Chanel was hugely influential in making costume jewellery socially acceptable and an absolute ‘must’ for every well-dressed woman.

For almost a decade, Jakob Bengel’s distinctive avant-garde costume jewellery designs echoed ‘modern’ Parisian taste; enormously successful markets opened up  in other parts of Europe and United States, enabling the Bengel company to construct its own specialized tools and machines, allowing an extensive repertory of designs to be developed.

The use of galalith for jewellery was prohibited in 1939 at the outset of WWII to save raw materials, and Jakob Bengel’s signature jewellery production thus came to an end. However, production was prolific during the 30s, with thousands of pieces stored away in the Bengel factory until the late 1970s. Many have surfaced to the vintage market in recent years, and have become some of the most sought after bakelite jewellery to wear and collect. None of Jakob Bengel’s jewellery were signed, and the authenticity is often questioned; especially now, as new pieces are being produced with Bengel’s original tools and machinery. These however, are produced with certification.

All pieces of Jakob Bengel acquired by Palette are authentic. Most have been worn and do show the slightest signs of use, commensurate with age; though we do have these pieces gently cleaned and screw clasps replaced where needed. Occasionally we do find pieces found in storage at the Bengel factory in the late 70s and early 1980s. These are described as new / old unsold stock. We only acquire our stock from the most reputable dealers in Paris, and can guarantee that all are genuine Jakob Bengel pieces produced in the 1930s.

Size Guide How We Measure